As a historical tourism city located in the central area of the Yangtze River Delta in Southern Jiangsu Province, Suzhou is renowned for its classical Chinese gardens and canals, recognized as the ‘Venice of the East‘. Over the last few decades, Suzhou has been able to attract a solid foundation of foreign investments with its mature manufacturing industry.

The industry structural optimization and upgrade which has happened over the last five years has been considered a major factor that continues to drive the city’s economic growth, as well as support the development of upscale hotels in the city.

The Suzhou Jinji Lake Central Business District is located within the core area of the Suzhou Industrial Park. Suzhou Industrial Park was initially modelled as a flagship economic cooperation project between the Chinese and Singapore governments. After the successful development over the past 20 years, it has become a major contributor of the city’s GDP and continues to progress and immerse into a core CBD area by integrating a comprehensive array of modern city functions such as grade-A offices, mix-use complexes, mega shopping malls as well as state-of-the-art research and development centres.

As Suzhou downtown will welcome four upper-upscale hotels in the Jinji Lake CBD Area, it will be interesting to see how the market reacts in the upcoming future. 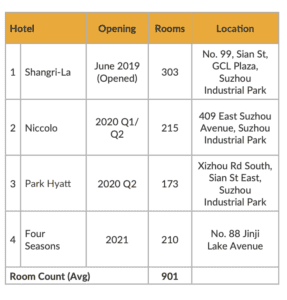 The Horwath HTL team in Shanghai have covered the following aspects in the report:

Other reports that may be of interest: Market Report: Wuhan, China ↔ China Summary Annual Study 2018