Hotel room rates have increased in all regions, up 6.9% on average rates achieved in 2017 when compared with 2016. During 2017, the South West and Western Seaboard regions were the strongest performing areas, with average room rates for both regions rising to €100.67 and €87.49 respectively, a growth of 8.0% in the South West and 9.7% in the Western Seaboard area. Rooms in Dublin hotels recorded average rate of €136.96 in 2017 some 6.8% higher than the price achieved in 2016.

During 2017 average room rates in Dublin increased at half the rate achieved in 2016 showing some moderation in growth even with very limited new supply. For the first time since 2011, average room rate growth in regions outside Dublin was higher than the capital pointing to a broader, more balanced recovery in the sector across the country. Profitability in the capital too increased at a lower rate when compared with other regions. Dublin hotels increased profits on average by 12% whereas the largest increase in profitability was achieved in the South West at 17.4% with Western Seaboard at 17% and Midlands & East at 13.9%. 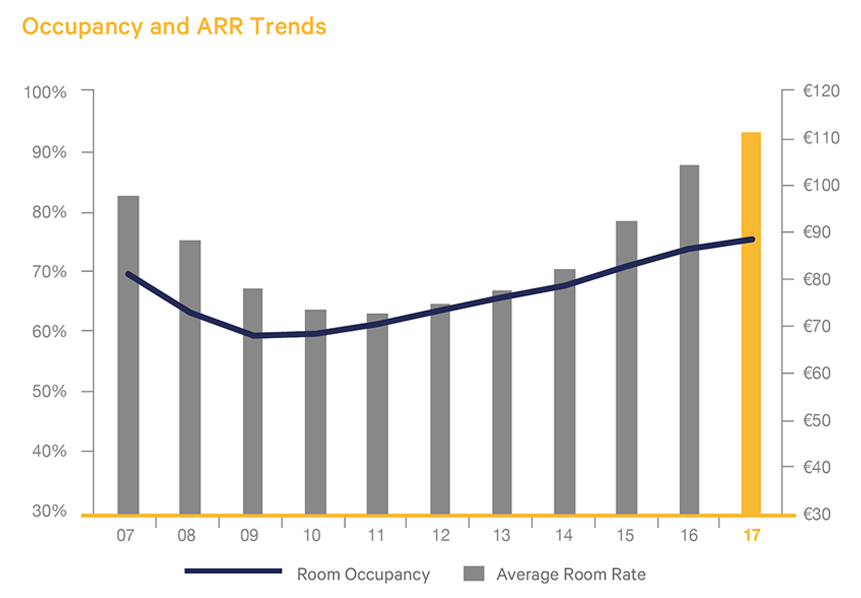 Commenting on this year’s survey, partner Aiden Murphy said: “The growth in the Irish hotel sector improved again in 2017, with increases in occupancy levels, average room rates and profitability not just in the capital, but across all regions. However, the levels of profitability recorded are needed to provide a sustainable business model to allow for the €1.5 billion investment required to deliver the additional 11,000 rooms required within the next seven years. Failure to deliver this capacity will impact on competitiveness and Ireland’s ability to maximise revenue from the tourism sector.”

To order your copy of the 2018 Hotel Industry Survey please contact Sinead O’Rourke.